How I Was Initiated By Two Works Of Visionary Art (And Helped Create A Piece That’s Now In The Smithsonian!)

Years ago, I went to Symbiosis, a music and art festival at Pyramid Lake. I was newly single, had recently moved to the Bay Area, and was feeling lost around how to live my true purpose. I had a big prayer to get more clarity and find my next level of joy.

By the second day, I was feeling more disoriented than ever. What was I doing there? What was the point? I went out for the evening feeling sad, confused, distraught, and completely overwhelmed.

I considered heading back to my tent to curl up into a ball and go to sleep, but the festival was so big and dark that I couldn’t find my way there.

I wandered around reluctantly, and something caught my eye. There was a small gallery displaying the most beautiful images I had ever seen.

(Up until that point I had only encountered one piece of Visionary Art and had no idea there was more). 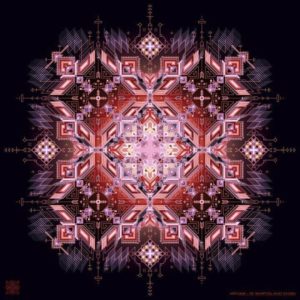 I went to stand in front of the first artwork that drew me in, Archer of Bardos and Stars by Kris Davidson and Kurt Redeker.

This is where things started to get weird and bit unbelievable.

After a few moments, the artwork began radiating its energy toward me. It reached out with its harmonious tendrils of sacred geometry and began to actively heal me from the inside out.

I started to feel a transcendent level of peace. My heart relaxed and all of the sudden I was truly joyful for the first time in a long time.

How was this even possible, I wondered?

In that instant, I realized that art is always impacting our consciousness, but we don’t always notice. I understood that we can choose art for the purpose of our awakening and healing, not just because it’s beautiful.

✨Art is not decoration, it is a crystallized form of consciousness channeled into existence by the artist.✨

Art can also be an expression of ego and have undesirable effects.

I knew that from that point forward I only wanted to be surrounded by art that was a pure emanation of Source, which is how I personally define Visionary Art. 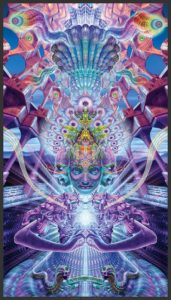 Stunned and in a state of disbelief, I moved over to Apotheosis by Luke Brown. I stood in the presence of the woman in the artwork and after a while, she began to deliver a message.

She said, “You are an emissary of shamanic art, and your purpose is to connect others with the art that will be most aligned for their healing.” She then took her hands and extended them toward me, placing the light she was holding directly into my heart. I felt her powerful transmission transform me.

My prayer had been answered.

I walked out of the gallery feeling a level of fulfillment so deep I never knew it was possible. I floated around the festival feeling more confident, empowered and inspired than ever before. It was pitch dark but I could navigate without any light. I was in a state of pure magic and art had awakened this in me.

I had no idea how this would manifest in real life, but soon after the festival, I received an invitation to the wedding of two new friends who inspired me beyond words.

As I spoke to them about their vision for the wedding, they shared that their dream was to have Android Jones paint a portrait of them in celebration of their union. They didn’t know him and weren’t sure how to make it happen, or if it was even possible.

Immediately I knew it was my assignment to bring this dream into reality because this would be an incredible work of art. I knew someone who was connected to the artist and began to put the pieces together, as my wedding gift to the couple. It was a winding road to get there but the artist became enrolled in the project and came to the wedding to create the portrait. 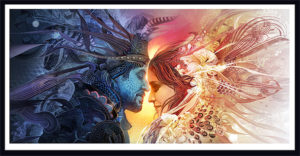 The portrait became Union, arguably his most famous work of art.

I constantly see Union posted all over the internet by people who don’t even know the couple, accompanied by words about divine partnership inspired by the art. My heart feels so full every time it happens.

As of today, Union is being displayed in the Smithsonian and I feel so thrilled to have played a role in its creation. I offer a huge congratulations to Android Jones for exhibiting his art there – a well deserved honor.

Since then I’ve continued to work behind the scenes to facilitate custom works of Visionary Art and Music, and it is a great joy every time.

This was the beginning of my deep love affair with Visionary Art. When I say art is my soul mate, this is where it all began, and there is so much more to come…