The Meaning of Eclipses in Vedic Astrology 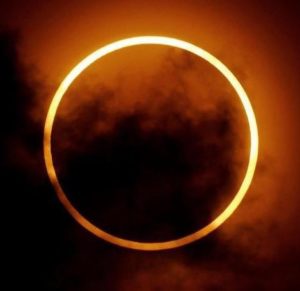 In the few days leading up to eclipses I always see a bunch of Facebook posts from well-meaning coaches and astrologers instructing us all to “plant new seeds” and “start new projects.”

However, eclipses have been considered inauspicious events for thousands of years. They have been viewed as very negative omens.

How then, could they be a good time to start something new? Is it just a superstition? And what is the best thing to do during an eclipse?

As the ancient Indian legend goes, an eclipse occurs when the shadowy demon Rahu Ketu gets his revenge on the Sun and the Moon by consuming them and stealing their luminous rays. Their pure, creative energy gets twisted and dark during the eclipse and for a few days after. This myth does not exactly conjure a heart warming mental image, and that’s intentional.

The truth, according to Vedic Astrology, is that eclipses can be a terrible time to start or end projects, relationships, jobs, or any other important thing in the material world. This is because auspicious beginnings are blessed with light, ideally the light of a healthy, full Moon and the daytime Sun. With Rahu and Ketu gobbling up this light and warping it in unseen ways, anything you start could turn out very strangely, and you may regret ending something as well…

Eclipses are a great time to stay in, meditate, and do your inner work.  In fact, they provide an especially rich opportunity to connect with spirit because the ‘veils’ are thin.

I always receive a lot of phone calls from clients who just made major decisions during the eclipse cycle (i.e. in the 2-4 week period that separates the Lunar and Solar eclipses).

They want to know if things will work out, despite the timing. For example, one had just bought a house. Another had signed a contract for her dream job. One more had met a man she was over the moon about.

While I assured them that things would work out the way they needed to, I couldn’t honestly say that everything was going to be a-o-k in the short term.

Sure enough, 2 weeks later, I learned that the newly purchased house turned out to be near the site of an undisclosed crime; the dream job dissolved into a heap of unfortunate misunderstandings and miscommunications; the relationship disappeared as quickly as it came.

Am I saying that nothing that begins on an eclipse can go well? No, like I always say, nothing in astrology applies to absolutely everyone all of the time. But the odds are not in your favor.

Do not, on the day of an eclipse or the few days surrounding it, start an important new project, sign a contract, make a deal, or any other material activity if you have another option.

You’re probably not being shown all of the details about the situation, or you may not be thinking completely clearly at this time, so it’s best to wait.

Something I’ve noticed is that the 2 weeks between eclipses (the eclipse cycle) is a bit of a “Twilight Zone.” Things suddenly veer off into an unexpected direction, only to course correct after the second (or last) eclipse.

You’re not truly out of the woods until after the Lunar Eclipse on July 16 (there are 2-3 eclipses in a cycle).

One of the most important things to check about an eclipse is to see if it’s visible where you are at the time that it happens. Where it’s visible, its effects are more pronounced.

The Annular Solar eclipse is only visible in Eastern Europe, Asia, North/West Australia, and Eastern Africa.

Solar eclipses are usually tougher because the Moon is always new/dark, which removes the Moon’s vital energy from our environment at that time. However, the most important factor is whether or not the eclipse is visible to us, and in this case, the Lunar eclipse can be seen in far more places.

So the next time someone tells you to do something important on an eclipse, send them this link so that they can learn another perspective and make an informed decision. You could be doing them a huge favor!

Want to know more about how to navigate the eclipses? Sign up below to get a free Bonus Guide.

How To Navigate The Coming Eclipses:
Reap the rewards & avoid major pitfalls Get the guide right away – just enter your first name + email address below.

How To Navigate The Coming Eclipses:

Get the guide right away - just enter your first name + email address below.